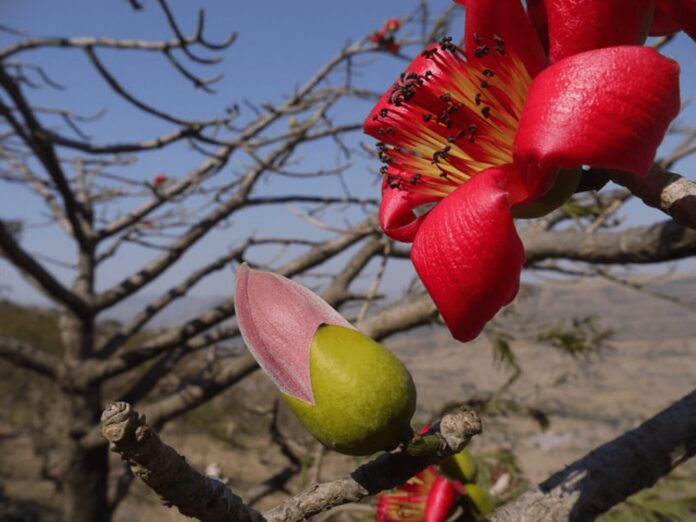 About Bombax Ceiba and Uses

Bombax ceiba, like other trees of the genus Bombax, is commonly known as cotton trees. More specifically, it is sometimes known as red silk-cotton; red cotton tree; or ambiguously as silk-cotton or kapok, both of which may also refer to Ceiba pentandra.

This Asian tropical tree has a straight tall trunk and its leaves are deciduous in winter. Red flowers with 5petals appear in the spring before the new foliage. It produces a capsule which, when ripe, contains white fibers like cotton. Its trunk bears spikes to deter attacks by animals. Although its stout trunk suggests that it is useful for timber, its wood is too soft to be very useful. 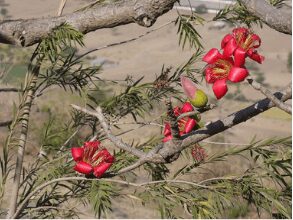 The tree is widely planted in southeastern Asian countries(such as in Vietnam, Malaysia, Indonesia, Southern China, and Taiwan, etc.) According to Chinese historical record, the king of Nam Yuet(located in the Southern China and northern Vietnam nowadays), Zhao Tuo, gave a tree to the emperor of the Han dynasty in the 2nd century BC.

This tree is commonly known as Semal (Hindi), Shimul(Bengali) or Ximolu(Assamese) in India. It is widely planted in parks and on roadsides there because of its beautiful red flowers which bloom in Mach/April. This tree is quite common in new Delhi although it does reach its full size of 69m there because of the semi-arid climate. The cotton fibers of this tree can be seen floating in the wind around the time of early May. This tree shows two marked growth sprints in India: in spring and during the monsoon months. Perhaps due to subtropical climate and heavy rainfalls, it’s found in dense population throughout Northeast India.

1. The cotton which comes from the tree is used to make pillows, quilts, sofas, etc.

2. The wood part is used in making match sticks.

3. Also for making canoes and light duty boats and or other structures required under water.